Most commercial robots have “closed” controllers and cannot be programmed at the low, direct-control level. The programming is done at a high, task level where the control strategy itself is not transparent.

Each joint is controlled by a dc servo. The position and velocity feedback signals for this purpose are provided by optical encoders, which generate digital pulses corresponding to motion increments at the joints. Potentiometers provide absolute position signals. Once the robot is programmed using VAL II, the control system computes the necessary joint motions, based on robot kinematics, that would achieve the desired motion trajectory, and provides them as the reference commands to the joint servos. Protection devices and brakes are available for discontinuing the operation under abnormal conditions.

The controller of a commercial robot such as PUMA 560 cannot be directly programmed according an advanced control scheme such as computed-torque or linearizing feedback. A commercial robot may be retrofitted, however, with an “open” controller by incorporating, for example, a powerful PC with a digital signal processor (DSP) board and an encoder board into the control loop.

Typically, the drive system has to be developed as well, with new amplifiers, current sensing means, and analog-digital conversion hardware. The architecture of an open control system of this type the retrofitted controller may be programmed using a language like C, according an appropriate low-level control algorithm. 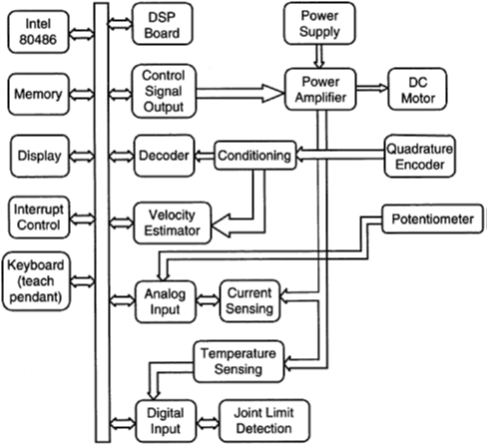 An open-architecture control system for a commercial robot.

In an industrial environment it is quite unlikely that a robot will function independently purely as a stand-alone device. For example, a flexible manufacturing cell (FMC) intended for the production of small batches of various parts might consist of one or more robots, several machine tools (milling machines, drills, forging machines, grinders, etc.), programmable fixtures (e.g., positioning tables, flexible jigs), parts transfer mechanisms (e.g., conveyors, gantry mechanisms), and inspection and gauging stations (e.g., vision systems, laser-based gauging devices), all coordinated and managed by a cell host computer through direct communication links. Several cells linked via a local area network (LAN) will form a flexible manufacturing system (FMS). A complex system of this nature is usually designed and operated in a distributed and hierarchical architecture.