Usually, motors run efficiently at high speeds. Yet in many practical applications, low speeds and high torques are needed.

A straightforward way to reduce the effective speed and increase the output torque of a motor is to employ a gear system with high gear reduction.

Gear transmission has several disadvantages, however. For example, backlash in gears would be unacceptable in high-precision applications.

Frictional loss of torque, wear problems, and the need for lubrication must also be considered. Furthermore, the mass of the gear system consumes energy from the actuator (motor), and reduces the overall torque/mass ratio and the useful bandwidth of the actuator.

A harmonic drive is a special type of transmission device that provides very large speed reductions (e.g., 200:1) without backlash problems.

Also, a harmonic drive is comparatively 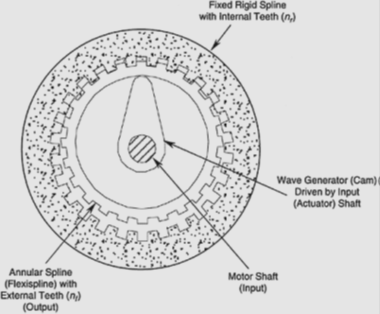 The rigid circular spline of the drive is the outer gear and it has internal teeth. An annular flexispline has external teeth that can mesh with the internal teeth of the rigid spline in a limited region when pressed in the radial direction.

This results in a tight mesh without any clearance between meshed teeth, and hence the motion is backlash free.

In the design shown in Figure, the rigid spline is fixed and may also serve as the housing of the harmonic drive.

The rotation of the flexispline is the output of the drive; hence, it is connected to the driven load. The input shaft (motor shaft) drives the wave generator.

The wave generator motion brings about controlled backlash-free meshing between the rigid spline and the flexispline.

nr=number of teeth (internal) in the rigid spline