Most commercial robots have “closed” controllers and cannot be programmed at the low, direct-control level. The programming is done at a high, task level where the control strategy itself is not transparent.

The low-level direct controllers in commercial robots are typically motion servos, which utilize strategies such as proportionalintegral- derivative (PID) control, velocity and current feedback, and lead-lag compensation. To implement a control scheme such as “computed-torque” or “linearizing feedback” in a robot, it is necessary that the robot controller be programmable by the user, which requires an “open” architecture with direct access to sensory signals and actuator drivers of the robot.

In addition to direct control, some monitoring and supervisory control may be needed as well at a higher, task level of robot. A hierarchical control architecture would be useful in implementing such multi-layered control.

The hardware components of a PUMA 560, a popular commercial robot. 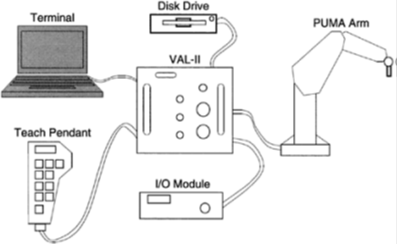 Potentiometers, a controller using an LSI-11/33 microprocessor supported by a multitasking operating system, and peripherals such as a terminal, disk drive, and teach pendant.

The system uses a high-level controller and operating system termed VAL II. This well-designed system uses a complete control language for conveniently programming motion tasks of the robot arm. Note that, in programming with VAL II, the user considers task kinematics only, without explicitly incorporating kinetics (force-motion dynamics) of the robot and its environment. Other functions, for example, for file editing and manipulation, are available as well with this controller.