If a conducting (i.e., low-resistivity) medium is subjected to a fluctuating magnetic field, eddy currents are generated in the medium.

Eddy current sensors may be used as either dimensional gauging devices or displacement sensors.

A schematic diagram of an eddy current proximity sensor is shown in Figure (a).

Unlike variable inductance proximity sensors, the target object of the eddy current sensor does not have to be made of a ferromagnetic material.

The coil closer to the probe face is the active coil. The other coil is the compensating coil. It compensates for ambient changes, particularly thermal effects. The remaining two arms of the bridge will consist of purely resistive 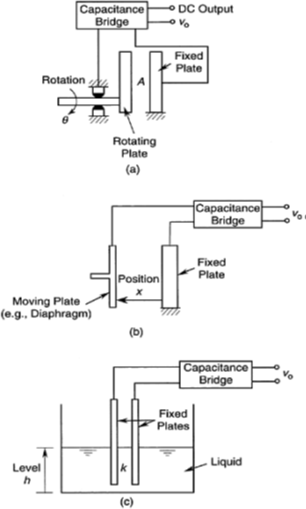 The bridge is excited by a radio-frequency voltage supply. The frequency may range from 1–100 MHz

This signal is generated from a radio frequency converter (an oscillator) that is typically powered by a 20 V DC supply. When the target (sensed) object is absence, the output of the impedance bridge is zero, which corresponds to the balanced condition. When the target object is moved close to the sensor, eddy currents are generated in the conducting medium because of the radio-frequency magnetic flux from the active coil.

The magnetic field of the eddy currents opposes the primary field, which generates these currents. Hence, the inductance of the active coil increases, creating an imbalance in the bridge.

The resulting output from the bridge is an amplitude-modulated signal containing the radio-frequency carrier. This signal can be demodulated by removing the carrier.

The resulting signal (modulating signal) measures transient displacement of the target object. Low-pass filtering is used to remove high-frequency leftover noise in the output signal once the carrier is removed. For large displacements, the output is not linearly related to the displacement.

Furthermore, the sensitivity of an eddy current probe depends nonlinearly on the nature of the conducting medium, particularly the resistivity.