Some forces in a control system are actuating or excitation (input) forces, and some others are response (output) forces. For example, torques (or forces) driving the joints of a robotic manipulator are considered inputs to the robot.

(From the control point of view, however, joint input is the voltage applied to the motor drive amplifier, which produces a field current that generates the motor torque that is resisted by the load torque at the joint.)

Gripping or tactile (touch) forces at the end effector of a manipulator, tool tip forces in a milling machine, and forces at the die in a forging machine can be considered output forces, which are “exerted” on objects in the outside environment of the system.

Output forces should be completely determined by the inputs (motions as well as forces) to the system, however. Unknown input forces and output forces can be measured using appropriate force sensors, and force control may be implemented using these measurements.

For example, the point might be completely restrained in the direction of fB, resulting in the constraint uB=0.  if we knew the dynamic behavior of the system—and assuming that there are no extraneous inputs (disturbances and noise)—we would be able to analytically determine the input fA that will generate a desired fB for a specified uB.

Then we could control the output force fB simply by supplying the predetermined fA and by subjecting B to the specified motion uB. The corresponding open-loop configuration. Since it is practically impossible to achieve accurate system 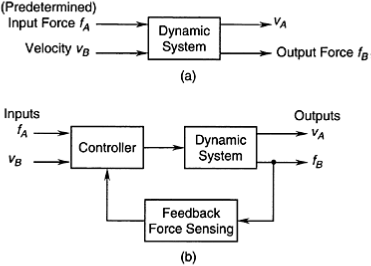 In this case, the response force ƒB is measured and fed back into the controller, which will modify the control input signals according to a suitable control law, so as to correct any deviations in ƒB from the desired value.