In force feedback control, the location of the force sensor with respect to the location of actuation can have a crucial effect on system performance, stability in particular.

For example, in robotic manipulator applications, it has been experienced that with some locations and configurations of a force-sensing wrist at the robot end effector, dynamic instabilities were present in the manipulator response for some (large) values of control gains in the force feedback loop.

These instabilities were found to be limit-cycle-type motions in most cases.

Generally, it is known that when the force sensors are more remotely located with respect to the drive actuators of a mechanical system, the system is more likely to exhibit instabilities under force feedback control. Hence, it is desirable to make force measurements very close to the actuator locations when force feedback is used.

It is known that the arrangement (b) in the Figure is less stable than arrangement in Figure (a). 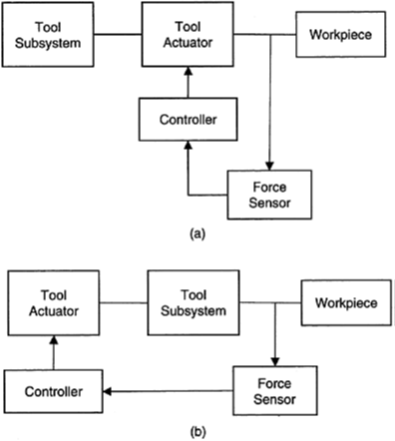 Arrangement in Figure (b) introduces more dynamic delay into the feedback control loop. It is well known that the time delay has a destabilizing effect on feedback control systems, particularly at high control gains. The root locus method is useful in stability studies of this type.