A dc tachometer is shown schematically in Figure (a). The field windings are powered by dc voltage uƒ.

Obtain a transfer function model for this device. Discuss the assumptions needed to “decouple” this result into a practical input-output model for a tachometer. 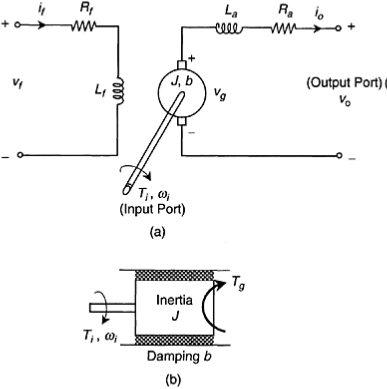 1.       The entire device is usually enclosed in a steel casing to shield (isolate) it from ambient magnetic fields.

2.       The conductor coil is wound on a core and placed centrally between two magnetic poles, which produce a crossmagnetic field. The core is attached to the moving object whose velocity u must be measured.

3.       This velocity is proportional to the induced voltage uo.

4.       Alternatively, a moving magnet and a fixed coil may be used as a dc tachometer. This arrangement is perhaps more desirable since it eliminates the need for any sliding contacts (slip rings and brushes) for the output leads, thereby reducing mechanical loading error, wear, and related problems.

5.       The dc tachometer (or, tachogenerator) is a common transducer for measuring angular velocities.

6.       Its principle of operation is the same as that for a dc generator (or, back-driving of a dc motor).

7.       A distinctive feature of permanent-magnet transducers is that they have a permanent magnet to generate a uniform and steady magnetic field.

9.       In some designs, a unidirectional magnetic field generated by a dc supply (i.e., an electromagnet) is used in place of a permanent magnet. Nevertheless, they are generally termed permanent-magnet transducers.