This displacement transducer operates on the mutual-induction principle. A simplified schematic diagram of such a device is shown in Figure (a).

The insulating “E core” carries the primary winding in its middle limb.

The two end limbs carry secondary windings, which are connected in series. Unlike the LVDT and the RVDT, the two voltages induced in the secondary winding segments are additive in this case. The region of the moving surface (target object) that faces the coils has to be made of ferromagnetic material so that as the object moves, the magnetic reluctance and the flux linkage will change. This, in turn, will change the induced voltage in the secondary coil, and this change is a measure of the displacement. 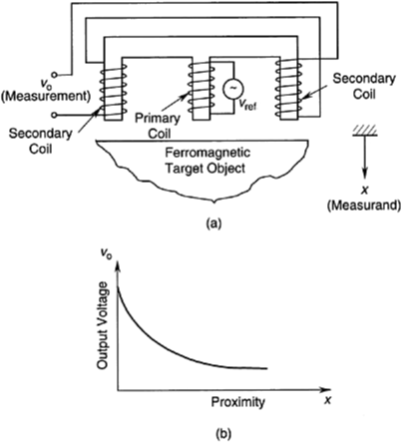 (A) SCHEMATIC DIAGRAM OF A MUTUAL-INDUCTION PROXIMITY SENSOR, (B) OPERATING CURVE.

Some typical applications are:

1.       Measurement and control of the gap between a robotic welding torch head and the work surface

2.       Gauging the thickness of metal plates in manufacturing operations (e.g., rolling and forming)

4.       Angular speed measurement at steady state, by counting the number of rotations per unit time

6.       Level detection (e.g., in the filling and chemical process industries)

Some mutual-induction displacement transducers use the relative motion between the primary coil and the secondary coil to produce a change in flux linkage. Two such devices are the resolver and the synchrotransformer.

These are not variable-reluctance transducers because they do not employ a ferromagnetic moving element.