PRINCIPLE OF OPERATION OF STEPPER MOTOR

The actuator is the device that mechanically drives a mechatronic system. Proper selection of actuators and their drive systems for a particular application is of utmost importance in the instrumentation and design of mechatronic systems.

There is another perspective to the significance of actuators in the field of mechatronics.

The terms stepper motor, stepping motor, and step motor are synonymous and are often used interchangeably.

Actuators that can be classified as stepper motors have been in use for more than sixty years, but only after the incorporation of solid-state circuitry and logic devices in their drive systems have stepper motors emerged as cost-effective alternatives for dc servomotors in high-speed motion-control applications.

Many kinds of actuators fall into the stepper motor category, but only those that are widely used in industry are discussed in this chapter.

Note that even if the mechanism by which the incremental motion is generated differs from one type of stepper motor to the next, the same control techniques can be used in the associated control systems, making a general treatment of stepper motors possible, at least from the control point of view.

There are three basic types of stepper motors:

3.       Hybrid stepper motors, which have two stacks of rotor teeth forming the two poles of a permanent magnet located along the rotor axis 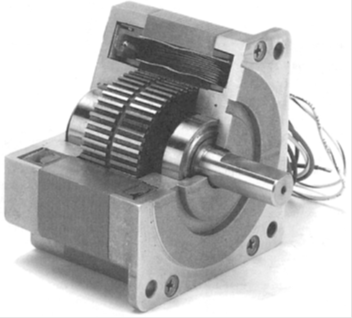