It is known from Newton’s second law that a force (ƒ) is necessary to accelerate a mass (or inertia element), and

its magnitude is given by the product of mass (M) and acceleration (a).

This product (Ma) is commonly termed inertia force. The rationale for this terminology is that if a force of magnitude Ma were applied to the accelerating mass in the direction opposing the acceleration, then the system could be analyzed using static

equilibrium considerations. This is known as d’Alembert’s principle.

The force that causes acceleration is itself a measure of the acceleration (mass is kept constant). Accordingly, mass can serve as a “front-end” element to convert acceleration into a force. This is the principle of operation of common accelerometers. There are many different types of accelerometers, ranging from strain gage devices to those that use electromagnetic induction. 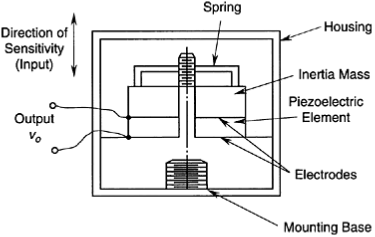 The force is measured by detecting the natural frequency of vibration of the wire (which is proportional to the square root of tension). In servo force-balance (or null-balance) accelerometers, the inertia element is restrained from accelerating by detecting its motion and feeding backs a force (or torque) to exactly cancel out the accelerating force (torque). This feedback force is determined, for instance, by knowing the motor current, and it is a measure of the acceleration.

element to measure the inertia force caused by acceleration.

A piezoelectric velocity transducer is simply a piezoelectric accelerometer with a built-in integrating amplifier in the form of a miniature integrated circuit (IC). 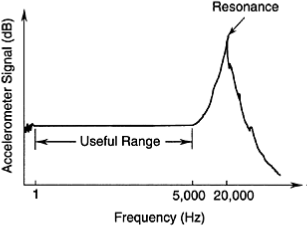 The advantages of piezoelectric accelerometers over other types of accelerometers are their light weight and high-frequency response (up to about 1 MHz). However, piezoelectric transducers are inherently high-output impedance devices, which generate small voltages (on the order of 1 mV). For this reason, special impedance transforming amplifiers (e.g., charge amplifiers) have to be employed to condition the output signal and to reduce loading error.

A schematic diagram for a compression-type piezoelectric accelerometer.

The crystal and the inertia mass are restrained by a spring of very high stiffness. Consequently, the fundamental natural

This gives a reasonably wide useful range (typically up to 5 kHz).

The lower limit of the useful range (typically 1 Hz) is set by factors such as the limitations of the signal-conditioning system, the mounting methods, and the charge leakage in the piezoelectric element, the time constant of the charge-generating dynamics, and the signal-to-noise ratio.

A typical frequency response curve of a piezoelectric accelerometer.

In a compression-type crystal accelerometer, the inertia force is sensed as a compressive normal stress in the piezoelectric element.