Thermionic systems are best suited where a low weight, silent operation, high heat rejection temperature, no moving parts, and no maintenance are desirable. In such a system electrons are ' boiled off an emitting electrode, the cathode, by heating it, and collected by a second electrode, the anode, placed nearby. The electrons return to the cathode via an external electrical circuit. Power densities of up to several tens of watts per square centimeter of electrode area are theoretically attainable in such thermionic diodes. 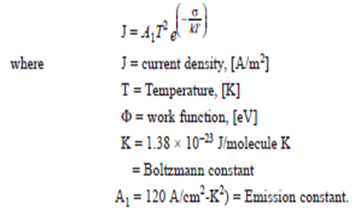