The direct quality and preference measurement has been developed in a marketing context but the economic field has also been working with quality measurements for a number of years. By introducing the hedonic technique it is possible to obtain much more information about the nature of the relationship between price and quality than would be the case if a traditional correlation study were used.

AN OUTLINE OF THE HEDONIC THEORY:

Where x is a vector of all other goods than the class of commodities considered and zi, I=1… n, are the attributes for this class. The vector αrepresents taste-determining characteristics and hence differs from person to person. Constrained utility maximization then leads to the bid function indicating the maximum amount a household would be willing to pay for different combinations of attributes at a given level of utility:    θ= θ (z1,...,zn,y,α)

Where yis the household income, Symmetrically, Rosen (1974) shows that by means of ordinary profit maximization it is possible to define the producer’s offer function indicating the minimum price he is willing to accept for different combinations of attributes at a given level of profit:

This envelope or function is the implicit price function or the hedonic price function as it is often called (Griliches, 1971) and it shows the market relationship between the price and quality attributes of the class of differentiated commodities considered

This is due to the fact that by help of the hedonic technique it is possible, by using time dummies or some other specification of time in the hedonic function, to separate the quality part of a price movement from the actual inflation and thus make it possible for the market analyst to adjust existing price indexes for quality variations and to make a prediction of future prices that also takes changes in quality into consideration. 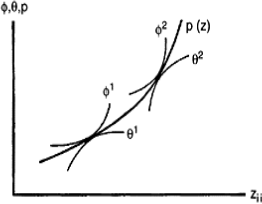 Fig: Offer and bid functions and the Hedonic function