A NEW METHOD TO ESTIMATE THE TOTAL QUALITY

Introduction:
The traditional method is to record costs as they arise (e.g. wage costs, material etc.) or are thought to arise (e.g. depreciations). However, this method is only applicable in calculating visible costs. The method builds on the basic principle of benchmarking where differences in quality and productivity may be revealed by comparing firms competing in the same market.

Method: The method is as follows.

Let Pjt stand for the ordinary financial result of company j at time t, and let Pjt/Nj stand for the ordinary financial result per employee. Nj denotes the number of employees, converted to full-time employees, in company j. Assume also that there are m comparable firms competing in the same industry/market. Now let the m competing firms be ranked as follows:

Based on this ranking, the lower limit of company j’s total quality costs at time t can now be calculated:

Lower limit is calculated as the difference between the ordinary financial result per employee of the most profitable firm (per employee) and company j, multiplied by the number of employees in company j. 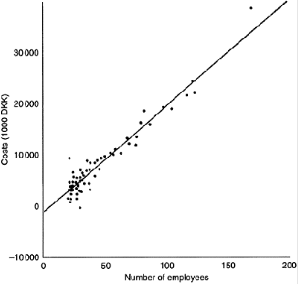