MANAGEMENT OR LEADERSHIP - WHAT IS THE DIFFERENCE

'Leadership is different from management, but not for reasons most people think. Leadership isn't mystical or mysterious. It has nothing to do with having "charisma" or other exotic personality traits. It is not the province of a chosen few. Nor is leadership necessarily better than management or a replacement of it. Rather, leadership and management are two distinctive and complementary systems of action.’ 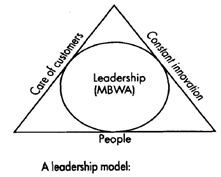 Figure represents a model where the continued effort to delight customers has to be matched by the constant need to innovate, using people as the best means. The whole effect is instigated, managed, coordinated and controlled by a leadership style which is informal and values the human creative potential.

A comparison of management and leadership roles: