The purpose of an analysis would be to assess the degree to which the predominant culture reflects the needs and constraints of the company. 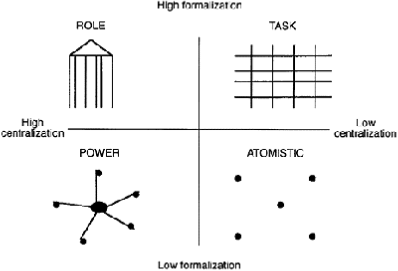 Power culture: The power culture represents the family business with a concentration of power. This power is radiated out from the centre by a key person to others in the family who then transfer the information on to other functions

Task culture: The task culture is characterized by a close liaison between departments and specialists in an organization that is involved in research and development activities. Temporary interdisciplinary project groups are organized around a task.

Atomistic culture: Atomistic culture is characterized by the decentralized informal approach where independent experts joined together for mutual convenience, e.g. a group practice or a consultancy.

Role cultures: The role cultures are typically bureaucratic organizations managed by time and motion studies and precise mechanical specifications with authority based on job descriptions.

A list of the characteristics of strong cultures that they identified is given below:

• had a widely shared philosophy of management;

• emphasized the importance of people to the success of the organization;