The concept of culture has been the subject of considerable interest in the recent literature on organizational theory but has not to any significant degree been discussed in literature on quality.

Some definitions of the culture:

There are many definitions of the concept of corporate culture. A few examples will be given in the following:

• ‘Corporate culture can be defined as a set of commonly held attitudes, values, and beliefs that guide the behaviour of an organization’s members’ (Martin, 1985).

• ‘Culture can be defined as the shared philosophies, ideologies, values, assumptions, beliefs, experiences, attitudes and norms that knit a community together’ (Kilman, Saxton and Serpa, 1985).

• ‘Culture will be used here to mean the belief’s top managers in a company share about how they should conduct their business’ (Lorsch, 1985).

• ‘Culture is the set values, behaviour and norms which make an organisation ticks’ (Atkinson, 1990).

• ‘The ways of thinking, speaking and inter-acting that characterize a certain group’ (Braten, 1983).

Corporate culture deals with values and norms in organizations. The company’s culture is expressed in visible terms in many different ways: through physical conditions like buildings, the company’s stationary, the quality, including design, of the products, the color of the company cars, etc. It is also expressed through the way people in the organization co-operate and solve problems. Generally speaking, the concept of visible management is closely associated with the use of the concept of culture in management theory. 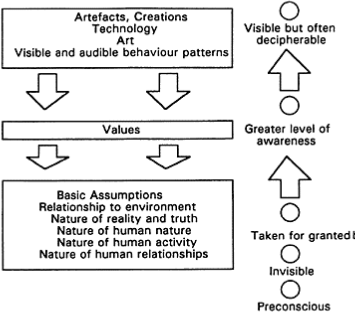 It is a conception of culture which is rooted more in theories of group development and group dynamics than in anthropologic theories of how cultures develop. This entails the assumption that it is possible in this context to take advantage of learning theories and to develop a dynamic conception of corporate culture. It also entails the assumptions that it is possible to integrate knowledge from other fields of theory with a view to gaining both a broader and deeper understanding of the extremely complex phenomena involved.

An example of cultural change is the Xerox case. The Xerox Company was forced to a radical change of corporate culture due to a collapse of its market shares in the world. To overcome this problem the company did not minimize the extent of the cultural change necessary.